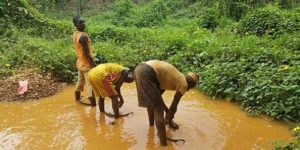 The report states that 96% of an annual USD31.5 billion in illicit flows is used to fuel global violence and fund terrorist organizations. This echoes another report released in September by the Center for International Policy that found that the majority of U.S. foreign aid funds were diverted to fund and supply terrorist organizations.

Combating organized crime must be considered a significant factor in conflict prevention and resolution if we are to become successful in securing peace. (Christian Nelleman, Head RHIPTO)

The exploitation of environmental resources such as gold, minerals, diamonds, timber, oil, charcoal, and wildlife has become the predominant source of illicit flow, comprising 38% of funds to criminal organizations. Illegal taxation and extortion of these resources accounts for 26% of illicit flows, making environmental crime the most lucrative source of illegal funding. Drugs are the second highest source of illegal funds (28%) for transnational crime.  Human trafficking and kidnapping were formerly primary sources, but now comprise only 3% of total illicit flows.

The report provides detailed information and maps describing the illicit flows, their sources, and the movement of funds, smuggled goods, and humans (both criminal and trafficked) across every region in the world. The primary organizations that benefit from illicit flows are the Islamic State (ISIS), Taliban, al-Qaeda groups, Boko Haram, Al Shabaab, and the former Revolutionary Armed Forces of Colombia—People’s Army (FARC). These organizations benefit financially, but also through the use of transnational criminal channels to smuggle people, goods, and money.  Criminal elites benefit from political instability, violence, and lack of global law enforcement, driving international crime and terrorism.

The environment and children bear the brunt of the cost of conflict. One in four children lives in a conflict area without access to proper medical resources, nutrition, or education.  The environment suffers from overfishing of seas, dumping of toxic waste, and exploitation of resources.

The report concludes that global peace and stability are contingent upon disrupting the activities of transnational organized crime.

More information can be found in the HSDL Featured Topic on Global Terrorism.