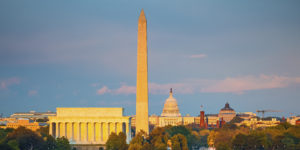 The Government Accountability Office (GAO) released a report highlighting the most significant threats to American security. GAO utilized survey information provided by 45 government organizations, including the Department of Defense (DOD), the Department of State (State), the Department of Homeland Security (DHS), and the Office of the Director of National Intelligence (ODNI). In addition to questionnaires, GAO supplemented the report with the data from most recent national strategies and ODNI’s 2017 Global Trends: Paradox of Progress report. The resulting report provides an overview of 26 long-range emerging threats of high national security consequence.

Examples of threats are the following:

Furthermore, the report covers roles and responsibilities of agencies that are essential in identifying and mitigating these threats. In particular, DOD, State, DHS, and the Intelligence Community are the key organizations tasked with maintaining the economic, diplomatic, and military competitive advantage of the United States at home and abroad.

The HSDL offers many resources related to national security in the following featured topics: Cyber Crime & National Security,  Global Terrorism, Unmanned Systems, Climate Change, Pandemics and Epidemics, and Immigration. Please note that an HSDL login is required to view some of these resources.

Need help finding additional resources?  Ask one of our librarians for assistance!