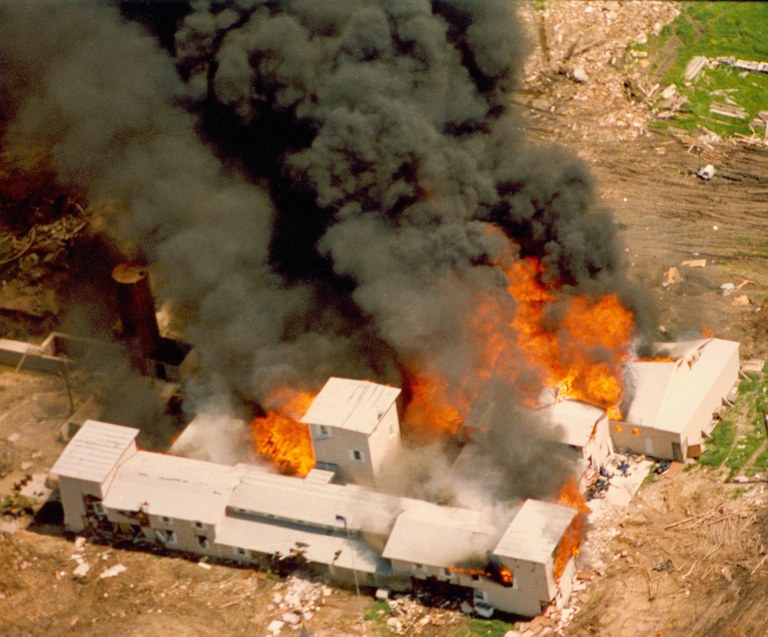 The 51-day Waco Seige standoff ended when the the Branch Davidian compound was engulfed by fires set by the Davidians, after the FBI used tear gas in an attempt to force the occupants to leave.

“On February 28, 1993, near Waco, Texas, four agents from the Treasury Department’s Bureau of Alcohol, Tobacco, and Firearms (ATF) were killed, and more than 20 other agents were wounded when David Koresh and members of his religious cult, the Branch Davidian, ambushed a force of 76 ATF agents. The ATF agents were attempting to execute lawful search and arrest warrants at Mount Carmel, the Branch Davidian Compound. Tipped off that the agents were coming, Koresh and more than 100 of his followers waited inside the Compound and opened fire using assault weapons before the agents even reached the door. This gunfire continued until the Branch Davidians agreed to a cease-fire. The ensuing standoff lasted 51 days, ending on April 19, when the Compound erupted in fire set by cult members after the Federal Bureau of Investigation (FBI) used tear gas to force its occupants to leave. The fire destroyed the Compound, and more than 70 residents died, many from gunshot wounds apparently inflicted by fellow cult members.”  — Dept. of the Treasury, Waco Administrative Review