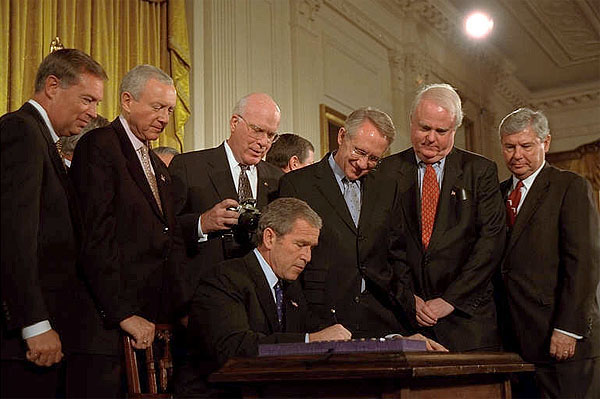 President George W. Bush signs the Patriot Act, Anti-Terrorism Legislation, in the East Room Oct. 26. “With my signature, this law will give intelligence and law enforcement officials important new tools to fight a present danger,” said the President in his remarks. White House photo by Eric Draper.

“Congress passed the USA PATRIOT Act (the Act) in response to the terrorists’ attacks of September 11, 2001. The Act gives federal officials greater authority to track and intercept communications, both for law enforcement and foreign intelligence gathering purposes. It vests the Secretary of the Treasury with regulatory powers to combat corruption of U.S. financial institutions for foreign money laundering purposes. It seeks to further close our borders to foreign terrorists and to detain and remove those within our borders. It creates new crimes, new penalties, and new procedural efficiencies for use against domestic and international terrorists. Although it is not without safeguards, critics contend some of its provisions go too far. Although it grants many of the enhancements sought by the Department of Justice, others are concerned that it does not go far enough.” — CRS