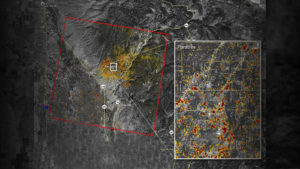 Map of damage to Paradise, California, from the Camp Fire, the deadliest wildfire in the state’s history. Image (Credit: NASA) 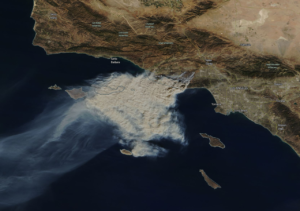 Woolsey Fire; Majority of western Malibu is engulfed by smoke and fire at the time of this image, with the blaze spreading into Thousand Oaks (Credit: NASA)

California’s most deadly and destructive wildfire in the history of the state, the Camp Fire, began on Camp Creek Road in Butte County. Within the first day, the communities of Paradise and Concow were essentially decimated. Because the fire spread so rapidly, many residents were unable to evacuate to safety before the fire arrived. Efforts to control and contain the fire were set aside in order to assist in getting people out alive (STL News). Dry and windy conditions hindered efforts of containment, and resulted in major losses and set devastating records for the state. Heavy rainfall on November 22nd and 23rd helped to contain the fire, and on November 25th, the fire was declared 100% contained.

On the same day, the Woolsey Fire ignited in Southern California, prompting an evacuation of 250,000 people (LA County Emergency Operations Center). Fueled by the Santa Ana winds, the fire spread rapidly and left firefighters to wait for ideal conditions in order to contain the flames. Over 3,000 firefighters were deployed to help attempt to contain the blaze. On November 21st, the fire was declared 100% contained.

Smoke from both fires prompted smoke advisories across the state, and on November 16th, “Berkeley Earth, a California-based nonprofit that analyzes air quality in real-time, ranked San Francisco, Stockton and Sacramento as the world’s three “most polluted cities” due to smokey conditions (abc News).