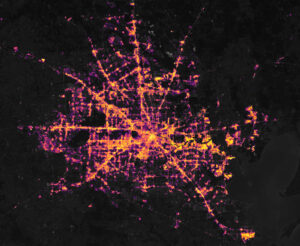 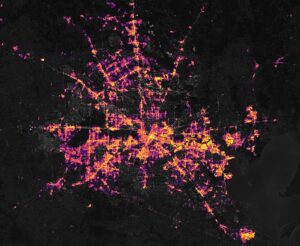 In mid-February 2021, three major winter storms struck—Feb. 10-11, Feb. 13-17, and Feb. 15-20—across the United States, Northern Mexico, and parts of Canada, causing blackouts for over 9.9 million people in the U.S. and Mexico, but notably impacting the state of Texas, where over 4.5 million households and businesses were left without heat, water, and electricity for several days. On February 21, 2021, nearly a week after the outages began, Governor Abbott announced power would be fully restored across the state within the next day or two (Feb. 20-21, 2020) (Texas Tribune).

Prior to the blackout, the Electric Reliability Council of Texas, or ERCOT, faced the decision to cut off power to more than 2 million homes–the largest forced power outage in U.S. history (Bloomberg)–in an effort to avoid a complete catastrophic failure of the power grid.

With natural gas equipment in Texas inadequately winterized, sufficiently cold conditions caused the power plants to fail. Additionally, the state’s energy sector is almost entirely disconnected from the rest of the country, which made it difficult for Texas to import electricity from other states. What resulted was a death toll in Texas that surpassed 110 people, the majority of which were associated with hypothermia, according to the Texas Department of State Health Services. There was also an elevated number of carbon monoxide poisoning cases, with over 300 reported that resulted in at least 17 deaths (Weather Channel).

Damage costs from the winter storm were estimated to be anywhere from $195-$295 billion, making it the costliest disaster in Texas history (Texas Tribune).