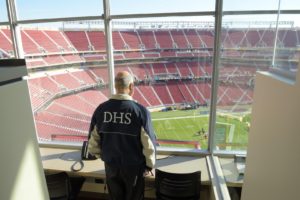 With the 52nd Super Bowl just around the corner on Sunday, February 4, 2018, security training and preparations have been in the works for weeks. As always, the Super Bowl is one of the biggest sporting, television, and entertainment events of the year, and warrants heightened security to ensure the safety of spectators, players, and the hosting city. Preparations and security procedures implemented for this year’s Super Bowl reinforce the importance of the U.S. Department of Homeland Security’s “If You See Something, Say Something” campaign. Collaboration between local, state, and federal authorities is paramount to ensure safety for all involved, and civilians are encouraged by authorities to remain alert and observant during Super Bowl events.

The U.S. Department of Homeland Security categorizes the Super Bowl as a Level One Special Event Assessment Rating, which qualifies the hosting city for federal resources in preparation, training, and security for the actual game day as well as the ten days of related festivities leading up to the event.

This year’s Super Bowl is hosted by the City of Minneapolis, Minnesota. The Minneapolis Police Department is designated as the lead agency for coordinating police services for all official Super Bowl events, and has been training thousands of volunteers over the course of the last several weeks.

Further, this year’s Super Bowl security preparations are capitalizing on technology. As reported in a Minneapolis local news article, a Minneapolis-based tech company developed an app at the request of the Minneapolis Police Department. The app will aid police, local, state, and federal partners in policing and monitoring the event.

The City of Minneapolis released a planning document outlining the basics of preparations for the Super Bowl events. The city also provides online resources covering all aspects of Super Bowl logistics. The HSDL has many more resources on related issues. Visit the Featured Topics for more on Mass Gatherings and Mass Evacuation.