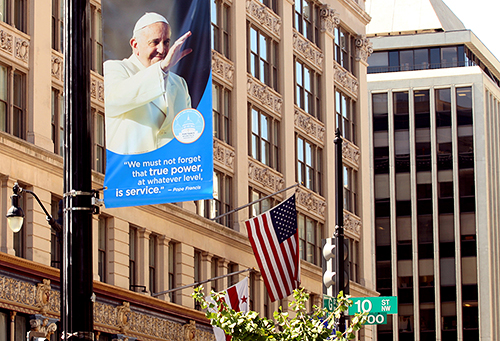 Pope Francis’ visit to the US next week poses significant security challenges.  The Secret Service has committed an unprecedented amount of time and manpower to ensuring the Pope’s security during his five-day tour, even going so far as to declare his visit a National Special Security Event (NSSE).  A recent FBI press release defines an NSSE as “a significant national or international event determined by DHS to be a potential target for terrorism or criminal activity”.  The special designation is most often used for presidential inaugurations or State of the Union addresses.

Washington DC and the cities of New York and Philadelphia have all announced widespread road closures and changes to public transportation routes as well as screening measures to which attendees will be subject.  Selfie sticks, large backpacks, and umbrellas are among the list of prohibited items along procession routes and ticketed events.  The Holy Father’s time in New York stands to pose the greatest challenge, as it coincides with the arrival of some 170 heads of state for the United Nations General Assembly.  His itinerary includes locations throughout the city, where some events are expected to draw crowds of several million.  Although Pope Francis is not the first pope to visit the US, his visit is expected to be the largest by far.

In the weeks and months leading up to his arrival, the Secret Service has reportedly engaged 50 federal and local agencies in preparations.  An FBI In a recent interview with ABC News, Congressman Michael McCaul, Chairman of the House Homeland Security Committee, alluded to a threat against the Pope that the Secret Service had recently “disrupted”, but no other details were available. Those planning to attend the events

in DC, New York, or Philadelphia should expect major traffic delays and prepare in advance for long lines at security check points.