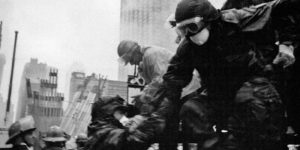 As Americans commemorate 9/11 attacks, the nation is continuing to grapple with the consequences of the largest terrorist attack on U.S. soil. Eighteen years have passed since the event brought an unprecedented breadth of research on terrorism, culminating in significant policy and legislative changes that continue to shape the U.S. foreign and domestic priorities. The 9/11 Commission report, published by the National Commission on Terrorist Attacks upon the United States in 2004, laid the groundwork for continuous investigations and reflections of the event. By providing an invaluable analysis of the attacks, researchers and policy makers remain dedicated to fulfilling their role in a global fights against terrorism.

The weighty domestic impact of 9/11 is undeniable. While the direct attack resulted in nearly 3,000 fatalities and injured more than 6,000, the toxic dust at the sites of the explosions continues to claim lives eighteen years after the incident. This year’s commemoration includes the 9/11 Memorial Glade to honor the first responders who developed chronic and life-threatening diseases, including cancer, from the exposure to toxins at the site.

As emphasized in a 2016 report by the International Association of Fire Fighters,

“[w]e must work together with elected officials and communities to develop effective protocols to help prevent and treat PTSD and to protect our professional fire fighters and EMS workers from deadly cancer-causing toxins.”

This year marks a significant development in post-9/11 legislation, whereby the September 11th Victim Compensation Fund, first authorized by Congress in the James Zadroga 9/11 Health and Compensation Act of 2010, has been permanently renewed by an overwhelming Senate majority in August 2019.

Meanwhile, the fight for global security against terrorism continues to preoccupy the U.S. and allied efforts. The eighteen years since 9/11/2001 significantly changed the face of terrorism. According to the “Eighteen Years On: The War on Terror Comes of Age” report by the Combatting Terrorism Center at West Point, low-level attacks are becoming more prevalent with new challenges of former fighters’ reintegration and rehabilitation demanding greater attention. At the same time, extremist groups continue to develop new sources of funding and support thus maintaining persistent threat across the world. To address these trends, the President Donald J. Trump has issued an Executive Order to Modernize and Expand Sanctions to Combat Terrorism, which “enhances our ability to use powerful sanctions to target terrorists and their supporters and deprive them of their financial, material, and logistical support worldwide.”

The HSDL maintains an archive dedicated to September 11, 2001 Attacks. Additionally, please visit Timeline for further details on the attacks and links to added records. Furthermore, we offer many additional resources related to the subject of National Security, which can be found in our Featured Topics for more on Global and Domestic (U.S.) Terrorism. Please note: HSDL login is required to view some of these resources.