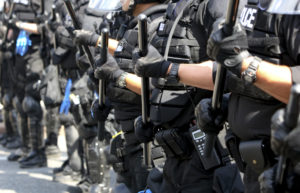 In his first few days in office, President Trump reiterated campaign commitments to clean up violent crime. In a tweet directed at the city of Chicago, President Trump claimed he would “send in the Feds” if Chicago didn’t fix “the horrible ‘carnage’”. Although the President did provide some statistics to back his claim, he failed to elaborate on any recommendations or policies aside from said “Feds” sending. However, the threat renews the debate on how to reduce violent crime in the U.S.

While national crime is at a historically low level, a surge of violent crime in major cities and counties has spiked in recent years. The Police Foundation and the Major Cities Chiefs Association released a report, “Reducing Violent Crime in American Cities: An Opportunity to Lead”, to address causes of the spike and provides 25 recommendations for the new Administration and Congress. The report seeks to “strengthen federal-local partnerships and support local efforts to reduce violent crime.” Recommendations call for immediate action and include the following key themes:

Overall, the report seeks accountability at local and federal levels through performance measurement, access to federal initiatives and tools, and support from the U.S. attorneys. Furthermore, the report addresses the availability and ease of access to firearms as a major contributing factor.

Installing measured policies and examining results is crucial to lowering crime rates. If you are going to “send in the Feds”, it’s best to send them in with facts and figures rather than a white horse alone. The Homeland Security Digital Library (HSDL) provides a large database to formulate policy from previous successes and failures. (some materials may require an HSDL login.)