Public Anxiety About Immigration: Unfounded or Just Swept Under the Rug? 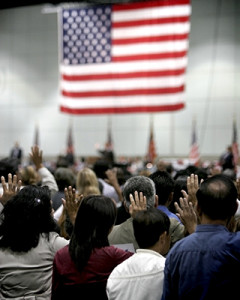 “Building and Maintaining Trust in the Governance of Migration” – that was the title of the 14th plenary meeting of the Transatlantic Council on Migration which took place in the summer of 2015 in Rome. As a result of this meeting, the Migration Policy Institute (MPI) has released their latest research, titled “Understanding and Addressing Public Anxiety About Immigration“. This report has been developed as a tool for policymakers; it is less about “fixing” immigration and more about managing expectations and overall narratives and providing good governance in an era of eroding public trust.

Across the globe – from Europe to the U.S. elections, anti-immigration rhetoric has been fueling anxiety and even overflowing into the realm of public policy (looking at you, Brexit). Yet, according to MPI, “anti-immigration sentiment is not reliably correlated with either large-scale increases in the foreign-born population, high unemployment, or economic downturns, as is often assumed; […] However, none of these concerns ‘on their own’ can explain what drives anxiety about immigration; rather, it is how they overlap and what triggers them in each context that determines public reactions.” Hmmm…so what’s a government to do? Although this report does specifically set out to be a strategic tool for policymakers, it is indeed heavy on the rhetoric, and light on the specifics. Understanding the roots of immigration-based public anxiety, and allaying uncertainties regarding resources, crime, and the livelihood of cultural values and norms is hardly a new or novel idea. Nevertheless, that does not make the topic less important: the public does need good governance to lead a positive immigration narrative – empirically demonstrating that immigration does not mean less jobs and less resources for citizens.

Concerns about safety and security, and the threat of terrorism play a immense role in the immigration narrative, and this is perhaps the greatest challenge.  MPI does note that national security and terrorism are the “one possible exception” to the lacking correlation and above-mentioned factors argument. If you’ve watched the news lately, these “undercurernts” certainly set the tone for discussion on migration and immigration. To that end, there is a reason why this narrative exists. Welcome to the spot between the rock and the hard place. Even though data shows that “immigrants, as a group, are less likely to engage in criminal activity than the native born” (the report provides references aplenty here – see footnotes 30 and 31), it is a hard pill for the public to swallow in the face of events like the mass sexual assault of women in Germany.

From a theoretical and strategic perspective, this report is full of great ideas. Creating more stakeholders and increasing community involvement in the new “we”, using immigration to promote economic competition, and regular updates to immigration policy, are all good ideas. Be that as it may, the fast-changing state of our world, with an ever-growing number of displaced and migrating persons, is at direct odds with the the loudest narrative. More than ever, governments need to step up, step in, revise the narrative, and rebuild the trust in governance and the rule of law.