Preparing for Attacks on the 2020 Election 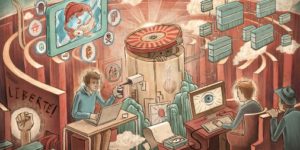 Recorded Future‘s Cyber Threat Analysis, Russian-Related Threats to the 2020 U.S. Presidential Election, evaluates the likelihood of an attack on the 2020 election.

The report looks at previously documented tactics, techniques, and procedures used by conspiracy groups and anti-government groups to interfere in the 2016 and 2018 elections, which include attacking candidate credentials and political party domain registrations, distributing polarizing content on social media, spearphishing, performing “hack-and-leak” operations, and using targeted intrusions to deploy malware.

Despite being more prepared than ever in an election year, the report expresses concern about direct Russian threats, but also indirect threats from non-state actors (such as QAnon) being amplified by Russian entities due to the large following they already have, and the ease of spreading misinformation and conspiracy theories via social media. As awareness of these types of channels increases, the subterfuge with which they operate does as well- primarily targeting social media due to the platforms’ difficulty with accurately detecting false personas.

While many organizations are preparing for Russian hack-and-leak operations as well as non-state threats in the months leading up to the 2020 U.S. presidential election, experts understand that they will not be able to stop every entity determined to corrupt the election, or prevent the spread of misinformation among the electorate.

For more information, visit the HSDL Featured Topics or our In Focus topics on Cyber Crime and National Security, Cyber Infrastructure Protection, and Cyber Policy. Please note that an HSDL login is required to view some of these resources.