After consultation with my Generals and military experts, please be advised that the United States Government will not accept or allow……

….Transgender individuals to serve in any capacity in the U.S. Military. Our military must be focused on decisive and overwhelming…..

….victory and cannot be burdened with the tremendous medical costs and disruption that transgender in the military would entail. 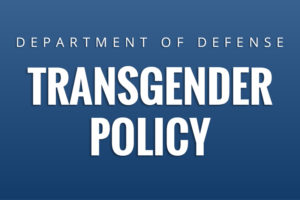 On July 26th, 2017 President Trump announced a major DoD personnel policy change. Transgender Americans are no longer allowed to serve in the United States Armed Forces. In the 24 hours since the announcement, there has been a hearty exchange of opinions on the policy, and a realization that seemingly no one really knows what the policy will mean.

Chairman of the Joint Chiefs of Staff, General Joseph Dunford, wrote in a letter military to leadership today, “There will be no modifications to the current policy until the President’s direction has been received by the Secretary of Defense and the Secretary as issued implementation guidance.”

Until such guidance is issued, we thought it would be a good idea to supply some resources to inform our readers about the previous policy and the changes this policy could affect.

Attorney General Eric Holder announced, “[…] the Department of Justice would take the position in litigation that the protection of Title VII of the Civil Rights Act of 1964 extends to claims of discrimination based on an individual’s gender identity, including transgender status.”

Both documents generally outlined the following:

If the DOD were to make policy changes to allow the open service of transgender individuals, considerations may vary for individuals who:

In all cases the DOD might need to consider administrative questions such as, the type of uniform worn, the gender listed on the individual’s military I.D., and duty and berthing assignments. If the individual is undergoing hormone therapy, another consideration might be the physical fitness testing and standards that apply as currently these vary by gender.

Secretary of Defense Ashton Carter announced that DOD would review its policies on transgender service. As part of this announcement he issued two directives:

Congressional Research Service issues the report, “Diversity, Inclusion, and Equal Opportunity in the Armed Services: Background and  Issues for Congress”

On the topic of transgender service, the report included the previously mentioned  DOD policies, and noted the following:

Should DOD change their admission and separation policies regarding the inclusion of transgender personnel, it might also consider changes to equal opportunity policies and programs to protect these individuals from discrimination.

The report also noted the lack of reliable numbers regarding transgender personnel in the DOD.

Secretary of Defense Ashton Carter issued a statement announcing transgender Americans could openly serve in the military, stating the following:

The policy will be phased in during a one-year period. Effective immediately, service members may no longer be involuntarily separated, discharged or denied reenlistment solely on the basis of gender identity. Service member currently on duty will be able to serve openly.

RAND released “The Implications of Allowing Transgender Personnel to Serve Openly in the U.S. Military” – a report that has been the source of many of the numbers in the transgender debate of late.

The FY2017 DOD Budget Proposal includes allocations for:  2,083,000 men and women in the four branches, including active, guard, and reserve components.

If this statistic (0.1 – 0.5%) were directly applicable, it would mean this new policy could potentially affect between 2,083 and 10,415 military servicemembers. (note: these force numbers have not yet been met)

The plan to implement the new policy is yet to be determined, but certainly there are an unknown  number of current military servicemembers paying close attention to what may become of their hopes of a military career.