Navigating “Fake News” in the Media 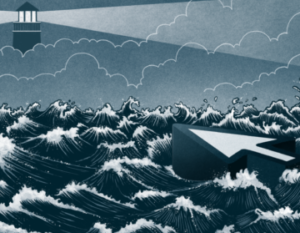 The Data & Society Research Institute released a third report from an initiative on Media Manipulation titled “Dead Reckoning: Navigating Content Moderation After ‘Fake News’”. This report addresses use of the term “fake news” to describe not only fake news but all manner of content in the media, the legitimacy of which may be based on the individual beliefs and perspective of the creator.

According to the authors, “fake news” poses a “significant threat to American democracy”:

Those unable to assess and critique online content for its veracity and journalistic integrity will run aground on hyper-partisan media sources that are trusted amongst members of their community. Without employing standards for what counts as news, societies lose the basic materials for democratic decision making.

Part I of the report explores the complexity of defining the term “fake news.” This term has been used as a means to criticize information as much as it is used to label problematic content such as conspiracy theories, hoaxes, propaganda, misinformation, and disinformation. The authors suggest that improving the quality of media content may be problematic due to laws protecting First Amendment rights to free speech, and copyright laws such as the Digital Millenium Copyright Act of 1998.

Part II of the report discusses four strategies being used to address the problem of “fake news”:

This report is meant to serve as a guide for entities attempting to establish appropriate means for content moderation and online publishing standards. The authors also hope to begin dialogue regarding who these entities should be in the social media era.

Non-registered users may access the report here, and an authors’ brief here.