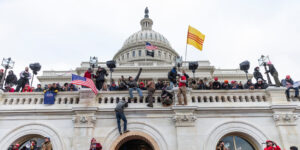 Researchers with the Technology and Social Change Project (TaSC) at Harvard Kennedy School’s Shorenstein Center on Media, Politics and Public Policy reviewed federal court documents for 417 defendants charged with federal crimes related to the January 6th, 2021 riot at the U.S. Capitol in Washington D.C.  In their working paper, “President Trump is Calling Us to Fight”: What the Court Documents Reveal About the Motivations Behind January 6 and Networked Incitement, it is revealed that, while there was a large variety of motivations amongst the defendants, a majority had similar reasonings for participating in the violent protest: “their desire to support President Trump, their concerns about the integrity of the 2020 election, or some combination of both.” The authors do point out that this study cannot ascertain the motivations of the overall crowd of protestors, as this research only delves into the motivations of those charged with federal crimes, which is a small minority of the thousands of people who attended.

given rise to a new form of insurgency that propagates organized political violence through ‘networked incitement,’ a socio-technical infrastructure where insurgents use multi-platform communication to command and control mobilized social movements in the moment of action.

It is the authors’ hope that their study will help “identify technological or legislative solutions that could prevent similarly violent attacks in the future.”

For more information, check out HSDL’s Featured Topics on Mass Gatherings, Domestic (U.S.) Terrorism, and Disinformation or explore documents included in the Capitol Riots Series. Please note an HSDL login is required to view some of these resources.