Just Released: Report to the Nation on Hate and Extremism 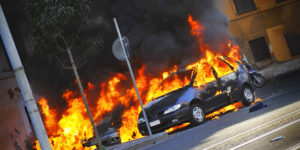 The Center for the Study of Hate & Extremism at California State University San Bernardino has released the “Report to the Nation: 2019 Factbook on Hate & Extremism in the U.S. & Internationally.” In the more than 100 pages of the report, the Center ‘s empirical findings put a spotlight on the targeted violence and victims in our society. Several sections divide the publication for clarity, such as Latest 2018 Major U.S. City Data, Bias by City in 2018, Hate Migrates and Increases Online, Russian Social Media Manipulation Continues, and U.S. NGO Data — Emerging Hatreds: Homeless, Transgender & Journalists. Some salient findings from this year’s Factbook include the following:

Brian Levin, Director of the Center for the Study of Hate and Extremism, and a primary author of the report, offers some poignant reflection on what the many pages of data actually means. “The overall data show polarization and fragmentation amidst sustained multi-year increases in hate crime and bigoted digital speech. In particular, both overt and shrouded xenophobia and anti-Semitism are key socio-political levers internationally, as societies become less unified, open, trusting in communal institutions, flexible on immigration, and tolerant. The most pronounced spikes occurred around domestic catalysts and international conflicts, but increasingly over the last decade, the worst months for both bias crime and fatal extremist violence were clustered around highly charged political events and conflicts relating to terrorism and immigration. […] Moreover, identified foreign and domestic malefactors still seek leverage by manipulating the widening fissures that divide us.”