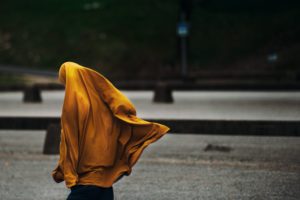 Retired Army Major Jason Criss Howk is extremely well-qualified to host We’re Just Talking About It. He is the author of the award-winning The Qur’an: A Chronological Modern English Interpretation, and has spoken nationally on the basics of Islam. He holds a Masters in Middle East and South Asia Security Studies from the Naval Postgraduate School in Monterey and has studied Arabic and Dari (Afghan Farsi) at the Defense Language Institute. He is also a Malone Fellow in Arabic and Islamic Studies.

Hollie Fleck, producer and co-host of the podcast, is an Emmy award-winning television news reporter, who now runs her own video company Candid Light Films.

The latest episode of We’re Just Talking About It dives into what life is like for women in Muslim culture. This 20 minute episode begins by discussing the recent changes in legislation that now allow women to hold drivers licenses in Saudi Arabia. The conversation also touches on the historical legacy and text of the Qur’an, as well as changes in the 1970’s that lead to a wave of conservatism in Muslim cultures.

Previous episodes include the following topics: topical headlines, key terms and concepts related to islam, and introduction to the text of the Qur’an, and more.

The HSDL offers many similar resources. View the following series for related content: Brookings: Rethinking Political Islam. Please note: HSDL login is required to view some of these resources. For specific research questions, feel free to Ask a Librarian.