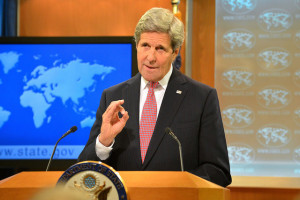 The U.S. Department of State has published its annual Country Reports on Human Rights Practices for 2015. This is the 40th anniversary of the report series, which issues a individual report for each United Nations member country regarding the status of human rights.

Unfortunately, as 2015 is viewed through this lens, the reflection is grim. In the Secretary’s Preface, John Kerry notes that latest edition of “Country Reports” signals a “global governance crisis” as evidenced by an “accelerating trend by both state and non-state actors to close the space for civil society, to stifle media and Internet freedom, to marginalize opposition voices, and in the most extreme cases, to kill people or drive them from their homes.” Although the trend is a cause for worry, Kerry notes that this development is in response to the push for more democracy around the world, as the non-elected civil society continues to demand basic rights, freedom, and dignity from those who govern.

Authoritarian and corrupt governments seem to be at the heart of the problem – creating political climates that erode the strength and effectiveness of institutions that would buttress the fight for human rights and civil liberties. Governments, fearful of change and democracy, continue to undermine democratic bulwarks such as free elections, freedom of the press, and fair and impartial court systems.  Even in unstable states, non-state actors, such as terrorist groups, now pose a grave threat to human rights around the world as well. In those areas where state credibility and institutions have crumbled, these non-state actors create their own environment of fear and oppression. As noted in the Introduction, “failed governance combined with repression of local civic activism helped Da’esh to take territory in Syria and Iraq and continued to provide an enabling environment for Da’esh and its affiliates, notably in the Sinai, Libya, and Yemen.”

Secretary Kerry charges that the contents of 2015 reports renews “our commitment to promoting and protecting universal human rights, to supporting and defending civil society in its peaceful efforts to hold governments accountable, and to working with our partners to advance peace, development, human rights, and democracy.”