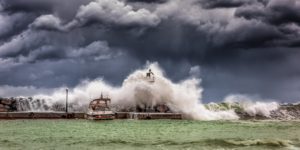 The National Security, Military and Intelligence Panel (NSMIP) of the Center for Climate and Security released a report warning the public of “high-to-catastrophic” threats to domestic and global security originating from climactic changes. Consisting of representatives from national security, military, and intelligence fields, the panel analyzed security impacts of global warming and identified major threats to the U.S. defense, critical infrastructure, and security institutions. Drawing upon the most recent empirical research, the authors determine that “even at scenarios of low warming, each region of the world will face severe risks to national and global security in the next three decades.”

The report concludes with a series of recommendations, including an urgent call to achieve net-zero global emissions, to “climate-proof” human security environments, infrastructure, and institutions, as well as to prioritize and address climate security threats in a concerted multilateral effort. Furthermore, the authors emphasize that current international commitments, such as the Paris Climate Agreement, “are not nearly commensurate to contain the threat.”

The HSDL offers many additional resources, including Featured Topics on Climate Change, Hurricanes, Mass Evacuations, Immigration, and Border Security. Please note that some of these resources require an HSDL login.