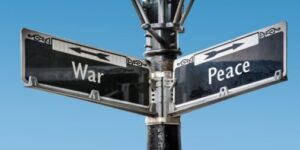 The Institute for Economics and Peace has released their 2022 Global Peace Index (GPI), which studies 163 countries for “the level of societal Safety and Security; the extent of Ongoing Domestic and International Conflict; and the degree of Militarisation” in order to provide an analysis of peace for each country.  This year’s report also discusses the conflict in Ukraine and its effect on peacefulness.

Five countries with the largest deteriorations are all currently experiencing on-going conflict: Russia, Ukraine, Guinea, Burkina Faso and Haiti. The top five countries with the largest improvements are Libya, Egypt, Saudi Arabia, Philippines and Algeria. The U.S. ranks 129th in peacefulness, lower than the prior year by one level, and dwelling in the second to lowest range for the “State of Peace.”

On a positive note, several areas of peace indicators did show improvement on a global scale, and “Terrorism impact is now at its lowest level since the inception of the GPI in 2008.”

For more information on topics related to this piece, visit some HSDL Featured Topics such as Global Terrorism, Border Security, and Nuclear Weapons, or search specific resources that discuss global peace.