The anticipated Trump-Ukraine Impeachment Inquiry Report has been released by the Democratic Party.

The inquiry, led by Adam B. Schiff, Chairman, House Permanent Select Committee on Intelligence, finds that President Trump not only violated the office of the President of the United States by seeking foreign intervention in an election in a phone conversation with Ukrainian President Volodymyr Zelensky, but also obstructed impeachment proceedings, including ordering witnesses to ignore subpoenas and failing to produce requested documents.

In the preface, Schiff remarks that

As this report details, the impeachment inquiry has found that President Trump, personally and acting through agents within and outside of the U.S. government, solicited the interference of a foreign government, Ukraine, to benefit his reelection. In furtherance of this scheme, President Trump conditioned official acts on a public announcement by the new Ukrainian President, Volodymyr Zelensky, of politically-motivated investigations, including one into President Trump’s domestic political opponent. In pressuring President Zelensky to carry out his demand, President Trump withheld a White House meeting desperately sought by the Ukrainian President, and critical U.S. military assistance to fight Russian aggression in eastern Ukraine.

The President engaged in this course of conduct for the benefit of his own presidential reelection, to harm the election prospects of a political rival, and to influence our nation’s upcoming presidential election to his advantage. In doing so, the President placed his own personal and political interests above the national interests of the United States, sought to undermine the integrity of the U.S. presidential election process, and endangered U.S. national security. 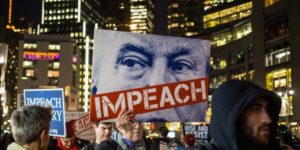 For more information, visit the HSDL Featured Topics or our In Focus topic on Impeachment.  Please note that an HSDL login is required to view some of these resources.