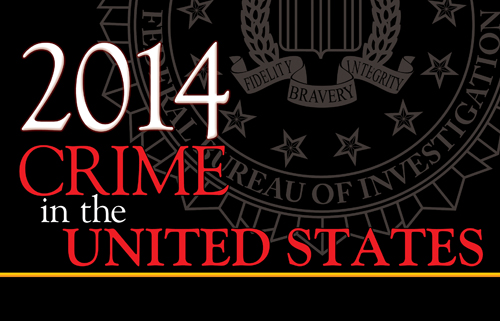 Each year the Criminal Justice Information Services Division of the Federal Bureau of Investigation (FBI) publishes the annual arrest statistics from the year prior. Today the FBI released its Uniform Crime Reports: 2014: Crime in the United States.

This vast dataset is displayed in three categories: Offenses Known to Law Enforcement; Persons Arrested: and Police Employee Data. Within each of the categories the reader is given the ability to view the data through the scope of national totals, by region, state, county, city, university, or in multiple other contexts. Each of the the three main sections has been broken down and summarized below. For a quick glance at some of the key highlights from the 2014 report, take a look at the corresponding FBI press release.

This section contains the bulk of the report by documenting the volume of criminal activity that occurred throughout the U.S. in 2014. The data is divided into the following subcategories:

This section of the report focuses on the characteristics of U.S. criminals. The three demographics that are used the most throughout this section are age, gender, and race. The report advises that it does not track “the number of persons who were convicted, prosecuted, and/or imprisoned,” but only the number of arrests made. This section also contains a table displaying the breakdown of Drug Abuse Violations throughout the U.S., which is categorized by drug, type of offense (Sale/Manufacturing or Possession), region (United States Total; Northeast; Midwest; South; and West), and what percentage drug offenders were of the region’s total criminal arrests.

This section contains departmental information on the number of law enforcement officers employed at each jurisdiction throughout the U.S. Just like with the two prior sections, this data can be viewed in the context of national, regional, state, countywide, city, or university totals. The report cautions that these numbers should not be viewed as reflecting each department’s preferred number of employees, but instead as displaying how many officers are currently employed.

To see similar statistics regarding 2014 American Police deaths in the line of duty, click here.

Additional resources for crime statistics available at the Homeland Security Digital Library include: