Extremism and Gun Violence: The Situation in Nevada 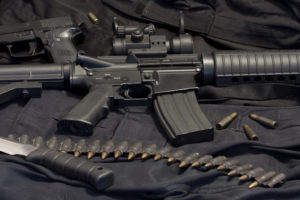 The Center for American Progress has released a report which places the spotlight on the rising trend of unlawfulness – not overseas or in some other country, but here in the United States, in Nevada. In “Violent Words, Violent Crimes: Anti-Government Extremism and Gun Violence in Nevada“, the Center delves into Nevada’s role in fostering this situation, the role of the Bundy ranch incident, and how guns have become the weapon of choice for both anti-government extremists and domestic terrorists.

According to the report, Cliven Bundy and the protests and standoff that he incited in 2014 and 2016 are the personification of the anti-government movement. In Nevada, the anti-government extremism primarily centers around “unlawful attempts to take control over nationally owned or controlled lands and terroristic threats against law enforcement officers. […] The modern public land seizure movement is the most recent incarnation of a century-long disagreement about the federal government’s role in owning and managing public lands in the Western part of the United States.”

Much of the anti-government sentiment revolves around a “call to arms” to protect one’s self and property against the tyranny of government. Guns play a principal role in anti-government rhetoric, and, as in the case of Jerad and Amanda Miller, led to the deaths of two police officers and two civilians. The report cites data from the Southern Poverty Law Center, which notes that in a study of domestic terrorism from 2009 to 2015, “guns were used in 59 percent of the incidents in which the type of weapon used had been identified.” Moreover, data from the Anti-Defamation League reveals that “guns were used in nearly every act of murder perpetrated by a violent extremism in the United States in 2015, accounting for 48 out of 52 victims killed in these attacks. […] The blunt fact is that, in the past 50 years, firearms in the hands of domestic extremists have killed far more Americans than have bombs, blades, chemical or biological weapons, or any other type of weapon.”

In the spirit of public safety and the safety of our law enforcement, the Center recommends three steps to improve gun safety and aid the in the prevention of anti-government extremists using guns as a means to “threaten, intimidate, and harm community safety. Those recommendations are:

1.) Strengthen federal and state laws to deter straw purchasing, in which one person buys a guy on behalf of another individual.

2.) Strengthen state laws to limit where guns can be legally carried, both openly and concealed.

3.) Strengthen laws to prohibit those individuals who have been convicted of domestic violence or hate crimes from possessing guns.