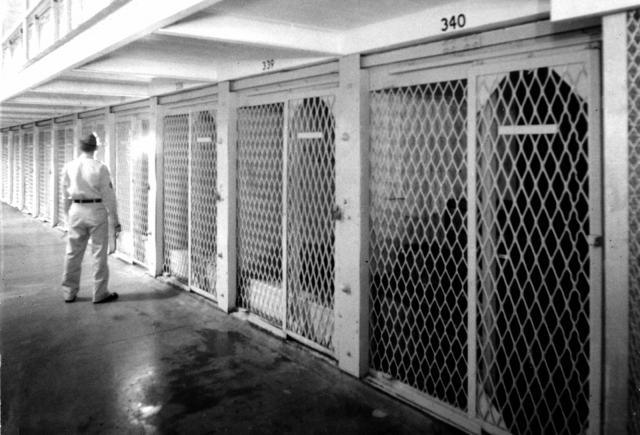 A new report released this week by the University of Texas School of Law Human Rights Clinic claims that the Texas Department of Criminal Justice (TDCJ) is guilty of human rights violations against inmates kept in “dangerously high temperatures and extreme heat conditions.” The report, “Deadly Heat in Texas Prisons,” finds that at least fourteen inmates incarcerated in various TDCJ facilities have died from extreme heat exposure since 2007, many with preexisting health conditions that made them heat-sensitive. In spite of these incidents, TDCJ “has yet to implement measures that effectively mitigate heat-related injury in inmate housing.”

According to the report, while TDCJ does not currently set a limit on how hot a prisoners’ cell can be (which can reach temperatures of more than 150 ºF), it does operate cooling procedures for the swine stables it owns. This discrepancy is described by the Human Rights Clinic as a gross violation of individuals’ human rights, “particularly the rights to health, life, physical integrity, and dignity.” The Clinic’s press release on the report also highlights extreme heat exposure as a violation of inmates’ Eighth Amendment rights, which protect them from “cruel and unusual punishment.”

To end human rights violations in Texas’ prisons, the report recommends that the TDCJ “codify that temperatures in inmate housing areas remain between 65 ºF and 85 ºF and install air conditioning in all of its facilities,” combined with regular monitoring of inmate health.

While an official response cannot be obtained from TDCJ at this time due to ongoing litigation, an article in the Texas Tribune, “Report: Prison Heat Violates Basic Human Rights,” provides insight into past state responses regarding this issue. According to the TDCJ, “retrofitting state prisons with air conditioning would be ‘extremely expensive,'” and “the prison system does have protocols regarding heat,” which includes the use of fans, ice, restricted outdoor access, additional showers, and training for employees and inmates on the signs of heat-related illnesses.

To learn more about this project and other projects of the Human Rights Clinic at the University of Texas, visit the “Clinic Projects” page of their website.