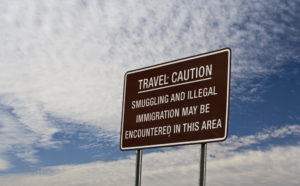 President Trump signed an Executive Order yesterday allowing families to be detained together, “where appropriate and consistent with the law and available resources,” after entering the U.S illegally.

This comes after weeks of public outcry and extensive media attention highlighting the detention of children in “tender age” shelters after separation from their parents. According to the Associated Press, over 2,300 children have been separated from their families since early May when the White House announced a ‘zero tolerance’ policy on immigration across the southern border.

The United Nations denounced the practice of separating children—as young as eight months old—from their parents as a “child rights violation”. On the heels of this criticism, the U.S. announced its intention to withdraw from the UN Human Rights Council on Tuesday citing reasons unrelated to the immigration policy criticism.

Separating children from their parents is not a new immigration policy.  It has existed to protect children when there is concern for the child’s welfare. The recent spate of detentions and separations stems from the change to a ‘zero tolerance’ policy, which includes establishing illegal entry as a criminal act. The U.S. Customs and Border Patrol Agency states that individuals entering the U.S. at illegal ports will be detained and prosecuted and separated from their children:

The Attorney General directed United States Attorneys on the Southwest Border to prosecute all amenable adults who illegally enter the country, including those accompanied by their children, for 8 U.S.C. § 1325(a), illegal entry. Children whose parents are referred for prosecution will be placed with the Department of Health and Human Services (HHS), Office of Refugee Resettlement (ORR).

Children are not prosecuted under this policy; as such, they are separated from parents transferred into the criminal system upon entry into the U.S. The new executive order will allow families to remain together while parents await prosecution, but pushes for immediate modification of U.S. District Court Flores v. Sessions, CV 85-4544 (“Flores settlement”) which currently stipulates that accompanied and unaccompanied minors cannot be held for more than 20 days. If modified it could mean families can be detained indefinitely—albeit together, until their case is prosecuted.

More information can be found in the HSDL Featured Topic on Border Security.