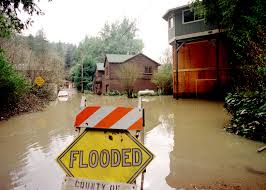 President John F. Kennedy once said that “the best time to fix the roof is when the sun is shining.” While the president was probably using this weather reference as a metaphor for politics, it applies today in a more literal sense to the state of California. According to the National Center for Environmental Information, in 2013 the state only received “32.8 percent of [its] average precipitation,” which registered as the state’s driest year on record until 2014 was worse. Current precipitation averages indicate that the state will record similar numbers in 2015, which is causing state officials to seriously consider more stringent water conservation polices.

Despite the drought, the Bay Area Council Economic Institute published its report Surviving the Storm as an analysis of the potential consequences in the event of flooding in the Bay Area. The report addresses its peculiar timing in the Executive Summary by stating:

While the state has averaged about 21 inches of precipitation per year since 1896, any given year can swing wildly from the mean, resulting in incidences of both devastating floods and remorseless drought. […] 2014 was the record hottest year in state history, and one of the driest in 500 years. At the same time, three of the wettest years in recorded California history have occurred since 1980.

The report begins by discussing the ramifications of severe environmental scenarios. These include extreme storms (12 inches of rain in a week or less), mega floods (nicknamed the “100 year flood” which occurs in California every 100-200 years), delta floods, the effects of the potential rise of the sea-level, and possible flooding scenarios resulting from an earthquake in the Bay Area. The report continues by analyzing the economic impact of flooding on critical infrastructure and the value of flood insurance. Included in this analysis data provided by California’s largest power provider Pacific Gas & Electric (PG&E), which estimates that it could incur up to $125 million in damages in the event of severe flooding.

The report concludes with historical anecdotes from bodies of water around the Bay Area, including the Napa River, San Francisco Creek Watershed, and both Oakland and San Francisco Airports. Its recommendations include “[supporting] the work of local flood protection agencies to plan and implement flood risk management,” constant evaluation of the risk of flooding, and consistent coordination among state, local, and federal entities.