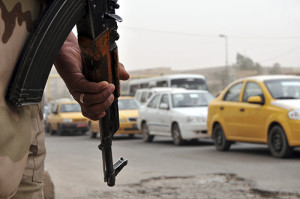 In a report released this month, Corruption in the Defense Sector: Identifying Key Risks to U.S. Counterterrorism Aid, SAM found that corruption is rampant among recipients of U.S foreign security aid.  The most common misuses of aid include nepotism, bribery, extortion, embezzlement, theft, and the misappropriation of arms and supplies. According to the report, corruption is the predominant reason why U.S. counterterrorism efforts are often critically ineffective and even counterproductive:

As the United States enters its 18th year of the global war on terrorism, it is becoming increasingly clear that corruption is one of the most significant stumbling blocks in U.S. efforts to tackle terrorism around the world.

In FY 2017-2019 the U.S. will provide $24 billion in aid to foreign security forces in 36 countries.  The largest recipients of aid are Afghanistan, Iraq, Jordan and Egypt. The majority of aid goes toward providing combat and tactical support to military groups, intelligence and surveillance support, military aircraft, logistics, and security. Arms and supplies are frequently diverted to the black market, leaving soldiers under-equipped while weapons end up in the hands of terrorist organizations. Diversion and misappropriation of funds, embezzlement and outright theft is widespread, as in the case of aid to Somalia in which it was found that only 30% of aid was being utilized appropriately.

Despite an existing framework for assessing corruption risk in the foreign aid sector, the U.S. State Department has failed to incorporate this framework and continues to provide high levels of security aid to counterterrorism efforts. The report describes a myriad of forms of corruption that have occurred and provides recommendations on preventing the misuse of aid in the future.  Primary recommendations of the SAM report include:

The report questions whether foreign counterterrorism aid is doing more harm than good and implores the U.S. government to channel efforts into developing anti-corruption programs as part of U.S. security aid projects.

More information can be found in the HSDL Featured Topic on Global Terrorism.