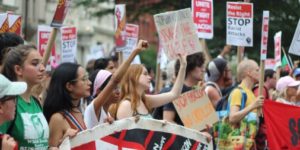 The United States Commission on Civil Rights has released “In the Name of Hate: Examining the Federal Government’s Role in Responding to Hate Crimes“. Director of the Commission, Catherine E. Lhamon, notes that violent incidents, such as the recent mass shooting in El Paso, Texas, demonstrate the imperative need for information and prevention regarding bias-based attacks. Director Lhamon points out that, “The highest percent of reported post-2016 election hate incidents were in K-12 schools, and the majority of these incidents involved racial discrimination.” Specifically, the Commission examined the three following areas of the U.S. federal government’s response to hate crimes:

Ultimately, the findings of the Commission’s investigation reveal several trends. 46 states and the District of Columbia have a formalized hate crime statute in place. Yet, according to the data, not only are hate crimes increasing in the United States, but there is also a severe underreporting of hate crimes. Even though bullying is not considered a hate crime, the report notes that bullying incidents are significant and should be addressed by educators, parents, and students in order to work towards active prevention. Overall, enhanced training of law enforcement officers and increased availability of resources are a clear path towards improved response to hate crimes. Based on these findings, the Commission makes the following specific recommendations: