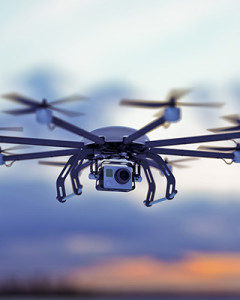 The National League of Cities (NLC) has published a primer for local officials on drones, federal regulations, and suggestions for creating local governance. In “Cities and Drones: What Cities Need to Know About Unmanned Aerial Vehicles (UAVs)“, the authors provide a guide on implementing drones into cities and fostering innovation, while also finding balance with new and increased federal regulation.

So, what is a drone? In previous years, the term was mostly reserved for unmanned military aircraft, and the term flooded news headlines regarding “drone strikes”. Yet, in today’s context, “most drones making headlines domestically are small model ‘quadcopters’ (helicopters with four propellers), with cameras attached to them.” And of course, you can find them on Amazon. The security challenge, though, rests with drones’ ability to potentially take aerial photos or video without permission, perhaps trespass or harass persons or property, or be operated incorrectly or recklessly. To that end, the Federal Aviation Administration (FAA) views all drones as aircraft, which are therein subject to Federal Aviation Regulations (FAR). The FAA has created four categories of unmanned aircraft operators:

1.) Part 107 Remote Pilots: Individuals above the age of 16 who have passed a TSA background check and FAA knowledge test, allowing them to operate drones both recreationally and commercially as long as those operations conform with Part 107 regulations. Most law-abiding operators will fall into this category. You can find the knowledge test and updates here.

3.) Public Operators: Individuals operating a drone for governmental purposes and public agencies, who must still also obtain a Certificate of Waiver of Authorization from the FAA.

4.) 333 Exemption: Individuals who have applied and been granted permission by the FAA to operate a drone for non-recreational purposes. If you would like to file a petition for a 333 Exemption, you can do so here.

Beyond the security challenge, however, is the unique opportunity that drones grant to communities. From fueling an industry of innovation and entrepreneurship, assisting in the search of missing persons, aiding firefighters in providing an otherwise-unseen view into burning buildings, or delivering medication to a remote location – the possibilities in which drones can enhance services and reduce risk are prolific. The strategies provided in this report, such as establishing clear when/where/how ordinances for drone operation and creating strong repercussions for those breaking the rules, are the pillars of best practices for addressing the municipal challenges and concerns associated with drones.

NLC provides all this information in a clear and cohesive manner. The goal is simple: protect communities and municipalities, but not at the expense of innovation; create an environment through policy in which good behavior is rewarded and unsafe or harmful behavior is not tolerated. If you don’t have time to read the full report, NLC has also created a short brief which can be read here.