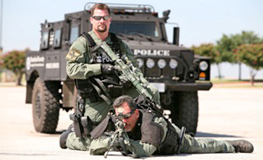 The United States (U.S.) has a strong interest in assisting its neighbors in matters of national security. By offering resources to improve/preserve the safety of citizens in bordering countries, the U.S. ideally hopes to improve their overall quality of life; thus reducing their impetus to contemplate illegal immigration into the United States. One aspect of this dynamic is ensuring that potentially dangerous materials created within U.S. borders (firearms, narcotics, etc.) do not fall into the hands of neighboring criminals; thereby diminishing the foreign security risk.

The U.S. Government Accountability Office (GAO) recently released a report titled U.S. Efforts to Combat Firearms Trafficking to Mexico Have Improved, but Some Collaboration Challenges Remain showing that this particular dynamic is especially present in Mexico, where the Bureau of Alcohol, Tobacco, and Firearms (ATF) has been working with U.S. Immigration and Customs Enforcement (ICE) to stem the flow of illegal firearms to Mexican drug cartels. Unlike in 2009 when GAO criticized both organizations for their lack of coordination, this report applauds ATF and ICE for taking steps to remedy “jurisdictional conflicts” and to improve cohesion. However, there is still room for the two agencies to improve as the majority of firearms seized in Mexico are of U.S. origin.

The key points of the report are as follows: