American Values at Risk: The Impacts of Climate Change on National Landmarks 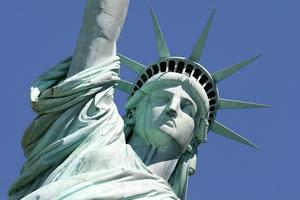 The impacts of climate change can be devastating to U.S. infrastructure; the natural disasters it induces (rising seas, floods, droughts, wildfires, etc.) can damage buildings, sever power lines, contaminate water, and destroy agriculture. Most of these assets are easily repaired or replaced, but what about damage done to infrastructure that holds sentimental value to the nation? Can the values and ideals they represent be as easily recovered? This “sentimental infrastructure” refers to the nation’s “iconic landmarks and heritage sites,” which the Union of Concerned Scientists argues are now being seriously threatened by the impacts of climate change.

In a new report, “National Landmarks at Risk: How Rising Seas, Floods, and Wildfires are Threatening the United States Most Cherished Historic Sites,” the Union presents “a selection of case studies that vividly illustrate the urgent problem of climate impacts on U.S. historical places.” A few of the 28 case studies explored in the report include the Statue of Liberty at Ellis Island, the Harriet Tubman Underground Railroad National Monument, Jamestown Island in Virginia, the Kennedy Space Center in Florida, and the Ames Research Center in California. A full list of the seventeen case studies can be found in the report’s Executive Summary.

The report argues that these sites represent values intrinsic to American culture, such as “patriotism, freedom, democracy, respect for ancestors, and admiration for pioneering and entrepreneurial spirit,” and it is for this reason that the sites must be protected from further damage. Ultimately, the Union calls for immediate action to make climate resilience a “national priority” and to reduce carbon emissions that cause climate change.