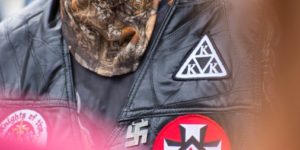 The Counter Extremism Project‘s (CEP) report on White Supremacy Groups in the United States is an expansive list of the different types of racial elitist groups operating in the U.S. since the inception of the Ku Klux Klan (KKK) in 1865.

The report identifies 199 known white supremacist groups, separated into two categories: National Socialists (or neo-Nazis), who believe that the white race is superior to all others and also hold homophobic and anti-Semitic viewpoints; and white ethno-nationalists, whose interests primarily include protecting white identity and culture from minorities and immigrants who (they believe) seek to destroy it.

Individuals from both groups are responsible for a wide variety of crimes, but are most commonly perpetrators of violent hate crimes and civil rights and firearms violations.

This report provides an overview of these groups, the violent crimes associated with them, their different recruiting techniques, and the media and rhetoric they use in attempting to pass their beliefs off as legitimate science. CEP additionally addresses the difficulties of tracking and circumventing these groups due to their ability to resurface online under different names and domains, including the Dark Web.

For more information on topics related to this piece, visit the HSDL Featured Topics on Domestic (U.S.) Terrorism and Lone Wolf Terrorism. Please note: An HSDL login is required to view some of these resources.