A Different Type of Illegal Immigrant: Animal Trafficking at the Border 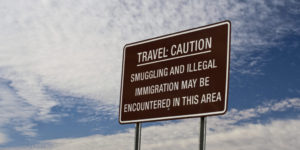 The Center for Immigration Studies (CIS) has released a new report on illegal wildlife trafficking and animal smuggling. In “Endangered at the Border: Animal Trafficking Closely Tied to Drug, Human Trafficking“, author Matt Sussis explores the relationship between animal smuggling and its close relationship to human trafficking, illegal immigration, and border security, noting that “animal smugglers and human smugglers are often connected to the same cartels [and] travel the same routes.” The report uses government data from the past thirty years and arrives at several key findings, which include:

Some of these cases have made headlines this summer, like the May 2018 incident in which U.S. Customs and Border Patrol Agents found a tiger cub close to the U.S. border with Mexico. Even though the United States and 178 other nations participate in the Convention on International Trade in Endangered Species of Wild Fauna and Flora, known as CITES, the global network of illegal immigration and economic incentive of animal smuggling has proved difficult to thwart. This is especially true for the United States, in which 25% of all animal smuggling into this country originates in Latin America, with some animals even being used as drug mules.

Federal government is taking steps to combat this problem. In February of 2017, President Trump signed the executive order of “Enforcing Federal Law with Respect to Transnational Criminal Organizations and Preventing International Trafficking“. Moreover, the government also passed the “Eliminate, Neutralize, and Disrupt (END) Wildlife Trafficking Act in 2016. While both pieces of legislation are helpful, CIS argues that legislation at the city and state level, particularly in border states, needs to be more robust in order to foster real change.