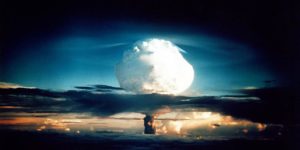 President Donald J. Trump has released a National Strategy for Countering Weapons of Mass Destruction Terrorism that focuses on preventing the use of weapons of mass destruction (WMD) by terrorists. The Strategy highlights the growth in terrorists’ “capabilities and aspirations” to pursue WMD enabled by the advances in dual-use technology and security issues of the existing stockpiles of fissile material in vulnerable states. Furthermore, the accessibility of commercial technologies, including unmanned aerial systems, or drones, provide terrorists with new means of WMD delivery.

The Strategy proposes the following objectives for countering WMD terrorism:

In addition to the above listed approaches, the United States Government should focus on global capacity-building by assisting other countries in combating the growing threat of WMD terrorism. To this end, the Strategy suggests encouraging foreign governments to implement additional laws and regulations necessary to enhance control over WMD-related material and technologies. Most importantly, by proactively engaging in these efforts, the United States Government can significantly reduce the probability and consequences of WMD terrorist attacks.

The HSDL offers many additional resources related to the issues of National Security and countering terrorism. Visit the Featured Topics for more on Global Terrorism, Domestic (U.S.) Terrorism, Nuclear Weapons, and Space Policy & National Security. Please note: HSDL login is required to view some of these resources.