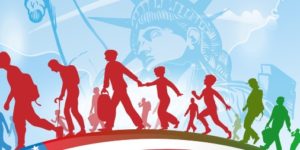 The data presented in the 2017 Yearbook goes back as far as the 1860’s, consisting of measurements in the following subject matter: Lawful Permanent Residents, Refugees and Asylees, Naturalizations, Nonimmigrant Admissions, and Enforcement Actions.

A notable finding from the 2017 Yearbook is that the number of aliens apprehended has been trending downward in the 21st century: over 1.8 million reported cases in the year 2000 down to just over 460 thousand cases in 2017. Over that same time frame, the number of persons obtaining lawful permanent resident status has been fluctuating right around 1 million: the low point being in the year 2003 with about 700 thousand cases, and peaking in 2006 with over 1.2 million.

For more information on topics related to this piece, visit the HSDL Featured Topics on Immigration.